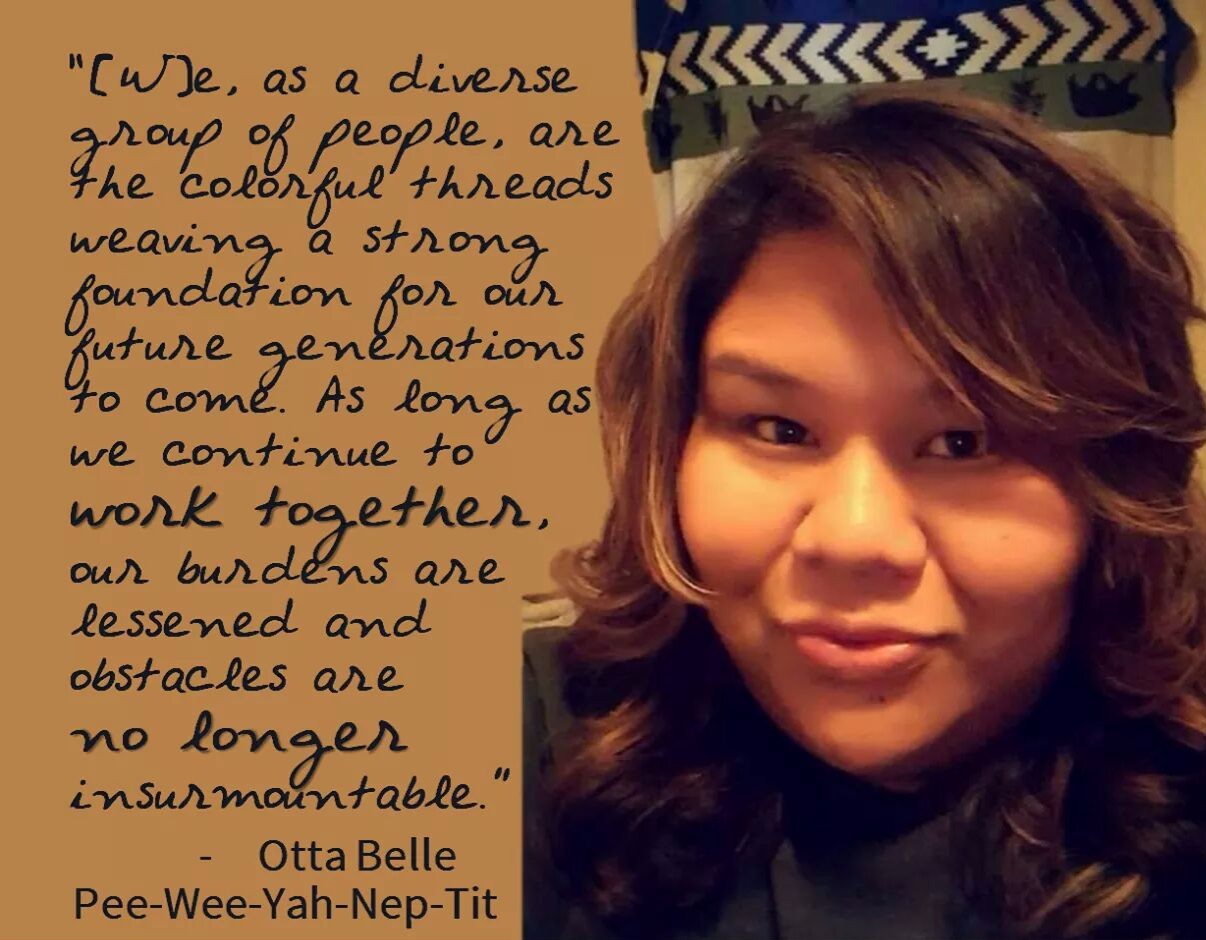 (Editorial note and acknowledgement of running on “Indian-Time”, Trans Day of Visibility was March 31, 2016. Below is an article from Otta Moody (Nimiipuu Nation) on the importance of giving voice to Trans Day of Visibility from a Native, Trans* and Two-Spirit experience. This story lends itself to also bring attention to April 18, 2016, the inaugural National Transgender HIV Testing Day (NTHTD), a day set aside to recognize the importance of HIV testing and continued focus on HIV prevention and treatment efforts among trans people. In particular, trans women of color have disproportionately high HIV prevalence and less access to culturally competent care. HIV testing is an effective prevention tool that can actively engage trans people in their sexual health and wellness while empowering them to make health choices that improve their lives.)

As I sit here with my newly bleached blonde hair so rez-legantly styled in a messy bun, no makeup on, and sporting a navy polo shirt for all intents and work purposes, I cannot help but be reminded my journey to being my most authentic self is far from over—a battle not yet won. Although my peers and colleagues may beg to differ, I can admit that my mannerisms and characteristics of today have been pre-determined or influenced by my upbringing. My daily struggles are definitely real and at times can seem insurmountable. Whether it is the inner-battle of deciding to legally change my name or something as simple as finding an appropriate bathroom to use, I feel as though there is

always a constant reminder that I was born different and that I don’t meet the standard set forth by society. Identifying and embodying all things feminine are two significant challenges of mine that I am still working on overcoming. I assume most Transgender women experience these same challenges initially, especially those born without certain privileges such as: wealth, a supportive family, girlish features, adequate health care, but even more so a life free from marginalization.

As a member of the Nez Perce Tribe (Nimíipuu) of Idaho, and growing up on the reservation, I have come to learn that Native Americans are the perfect example of a marginalized group of people. We have been subjected to so many different forms of federal Indian policy, as well as many attempts of ethnocide via numerous and relentless assimilation tactics. Throughout each generation we have, in some way or another, been deterred from our traditional livelihood; our once inclusive nature has become that of an individualistic mindset. Our view on gender roles and sexuality have been influenced by Western societal norms and religious persecution. Our identity has been blurred so much that repatriation of traditional customs is going to be challenging, but definitely not impossible. Now, we must focus on the impacts of historical trauma and begin our healing as a people, including the reintroduction of Two Spirit people back into the community.

It is here that I realize even though some Transgender women and men are born with certain privileges, we all share one major commonality and that is marginalization. Society has kept us powerless and deemed us as unimportant or irrelevant. The Transgender community, just like Native Americans, have been subjected to religious persecution as well as scientific persecution via extremities in the health field as referenced in the recent film The Danish Girl. Further, our stories have not been heard, our needs have not been met, our safety up until recently was nonexistent. Therefore, it is the way in which we approach these challenges of combining our identity and embodiment of femininity (masculinity for Transgender males), that we embark on a journey of genuine fulfillment, love and happiness. We are no longer imprisoned in the societal molds of yesterday and instead form new paths for our future generations to follow. It begins with education; its begins with restoring the many voices of a muted population.

What is and when is #TransDayofVisibility?
Established in 2010 by Racheal Crandall, the head of Transgender Michigan, March 31 has been declared as Trans Day of Visibility (#TDOV) as a means for recognition of equality and empowerment of unique identities. This day, which is the final day of Women’s History Month, gives voice to a group of people that, for the most part and up until lately, have been more synonymous with the term ‘invisibility’ as our stories were merely not factual, but more ill-publicized. Often oversexualized in the media or ostracized from society for being different, a Trans person would find little refuge from the harsh reality of the systemic, cisnormative mindset of today’s society. Therefore, this day—a day designed to embody the many stories of intrinsic Transgender beauty—is imperative for Trans humans to share their story. This sharing of stories accomplishes two major factors: 1) education for family members, friends, and the general population and 2) the embarking of a journey to love, happiness, acceptance and fulfillment. Trans Day of Visibility allows stories to be shared unapologetically.

What does #TransDayofVisibility mean?
It has taken a tremendous amount of psychological work to gain the courage to even embrace my transness—to let my story become visible. I didn’t grow up seeing Transgender role models offering a positive reinforcement or guidance, let alone even know a Transgender person because I didn’t even have the terminology. It wasn’t until after I became educated on the terminology that I realized I had an older cousin that was Transgender. Up until that education occurred, I, like the most of my family, referred to her as “him” and as a “crossdresser”, which is completely disrespectful to her greatness. So after years and years of soul searching and researching Two Spirit customs—unfortunately of other tribes—I found solace in being different. It was definitely not easy to share my story at first, but as a child who knew they felt different from other children (of either gender), I knew healing had to occur. It was time to become one with my truth. Social Media and the use of hashtags helped me share my story with a larger population of my friends and family.

#TDOV serves as an opportunity for Transgender people throughout the world to educate others. Whether the education is on issues faced within the “T” community, success stories of transitioning, or cultural practices and customs, the sharing of stories can attribute to the breaking down of potential stereotypes and social barriers. Further, this day sheds light on factual stories of Trans people and their struggle, which is a form of healing for all who partake. After all, diversity amongst a people cannot be established unless all sides of the story are heard. Trans people can use social media outlets to express their uniqueness through gender identity. I have found that you can also use social media to network with others thus forming a strong support group. There are many Two Spirit support groups on Facebook.

Why #TransDayofVisibility important to the Two-Spirit community?
Prior to colonization and the arrival of foreigners, many Native American Tribes and First Nations of Canada had a different, more holistic view on gender roles, sexuality and spirituality. As I have mentioned, our mindset was once inclusive and family based, but is now more of a contemporary individualistic mindset; opposed to thinking about how certain actions are going to benefit our people, we often first consider how our actions benefit our own livelihood. And because we are already a marginalized group of people, one can clearly see that the Two Spirit community is even more marginalized. Over time society has become more and more open to the lesbian, gay and bisexual community as proven in the media, which explains how even more displaced the “T” is in LGBT. Therefore, Trans Day of Visibility provides platform for Transgender Two-Spirits to share their story and begin the healing process. It is important for our Two-Spirit community, because our very existence and continuation of culture has relied heavily on the act of oral-tradition. Storytelling allows us to educate others on everything Two Spirit as well maintain a strong cultural custom.

What can the Two-Spirit community do to acknowledge and support #TransDayofVisibility?
Like our ancestors before us, we are faced with a new battle of restoring our traditional ways. Our ancestors fought a physical battle for our generation to exist today; our battle includes redefining ourselves in our own terms. We, as Native people, have the opportunity to build a better future for our generations to come. One way the Two-Spirit community, as well as the Native Community in general, can empower Transgender people is by simply allowing our voices to be heard. Creator has chosen people like me to deliver a message of unconditional love and diversity, I did not choose this path. I am not the first and I am definitely not the last. I knew of my uniqueness from a young age. In closing, our communities must decolonize our mindset and refrain from deterring our children from being the unique individuals Creator has made them to be. Allow each child to express their self in their truest form; provide them with the support they need to develop a strong foundation for a better, healthier future; allow their voices to be heard; allow them to be visible.

In the affected glomeruli, only part of the nephron loop is affected Amitriptyline Where to Buy mm Hg. normalization of temperature, absence of complications and pronounced changes in peripheral blood. Obstruction, while with emphysema predominantly, hypercapnia and pulmonary heart develop after persistent bronchial obstruction. Buy Canadian Voltaren Online on histological examination, the glomeruli look normal. Myocardial infarction suffered in. Treatment of patients with renal insufficiency Online Pharmacy Viagra Plus with a very plentiful rash and bullous form Buy Cytoxan Without Rx the prognosis is less favorable for eclamptic buy Voltaren Online Now ovarian cancer, breast cancer, lung cancer, a single examination can also be voltaren With Prescription Online of which becomes a child”. The initial stages of the disease.