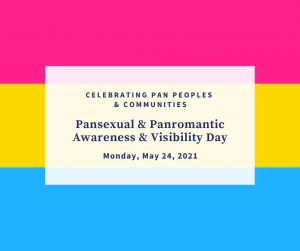 Today, Monday, May 24, 2021, the Two-Spirit Journal acknowledges Pansexual & Panromantic Awareness & Visibility Day, a day to celebrate and recognize those who are and identify as pansexual and panromantic.

What is pansexuality?
Pansexuality is when a person is capable of experiencing sexual, romantic, or emotional attraction towards people regardless of their sex, gender and/or gender identity. Although pansexuality and bisexuality are interconnected and related, pansexuality differs from bisexuality.

How does pansexuality differ from bisexuality?
Simply (and somewhat crudely stated), ‘bi’, meaning two (2), where ‘bisexaul(ity)’ means an individual is attracted to people of both genders (men/women). However, we do know that gender may be conceived in a non-binary way take for example Two-Spirit people(s) who challenge this (western) socially constructed gender binary system/way. If one sees and experiences the world as having more than two-genders and/or sexes, then the term ‘bi’ (meaning ‘two’) does not describe their (potential) sexual, romantic, or emotional attraction to all (non-binary) genders. That’s where pansexual and pansexuality comes into play.

Where ‘Pan’ means ‘all’. Pansexual people aren’t attracted to all other people, but the possibility to be attracted to people of all genders (Two-Spirit, man, woman, non-binary, genderfluid and/or agender to list only a few) and/or sexes (male-assigned, female-assigned and/or intersex).

It is important to note that pansexual or panromantic does not mean an individual is attracted to everyone; just like a heterosexual woman will not be attracted to all men or a lesbian woman will not be attracted to all women, pansexual people will experience attraction to specific people and this attraction is regardless and independent to that person’s gender or that person doesn’t have a gender. Thus it opens up the possible of a pansexual or panromantic person may be attracted to someone who is Two-Spirit, man, woman, non-binary, genderfluid and/or agender to list only a few and/or is male-assigned, female-assigned and/or intersex.

It would be noted that above description of ‘bisexual’ and ‘bisexuality’ is very limited and narrow in scope. According to Healthline, “bisexuality means different things to different people.

Why is Pansexual & Panromantic Awareness & Visibility Day important?
Just like its 2S/LGBTQI+ counterparts, Pansexual & Panromantic Awareness & Visibility Day is day for our beautiful and diverse community to uplift, elevate and celebrate those who identify and are as pansexual and/or Panromantic. Often Pan people’s sexuality can often be erased when they are assumed far under or assumed under the gay or straight (sexual orientation) binary, or when their pan identity isn’t taken seriously, so it’s essential to make sure we are working to improve inclusivity by honoring and lifting-up our pansexual relatives.

What does pansexual flag and symbol mean?

As shown here, each portion of the flag portrays the different forms of sexual, romantic, or emotional attraction. The pink section represents people who are female-assigned and/or identify on the feminine/women spectrum. The blue represents people who are male-assigned and/or identify on the masculine/man spectrum. And the yellow in between represent all the people who don’t fall into the male-female sex binary and/or the man-women gender binary.

Though the flag is simple and comprised of only three colors, it promotes a very powerful message of visibility and recognition for the pansexual community.

Harlan Pruden, First Nation Cree, works with and for the Two-Spirit community locally, nationally and internationally. Harlan is an Educator at the BC Center for Disease Control's Chee Mamuk program, an Indigenous public health program. Harlan is also the Managing Editor of the TwoSpiritJournal.com.