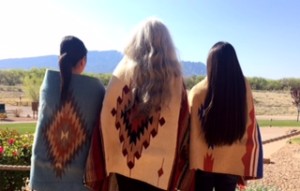 (Washington, DC) March 8, 2019 is International Women’s Day! The #Two-Spirit Journal acknowledges this day with this special article written by Jen Deerinwater and is offered as a showcase of our ongoing commitment to women’s equity, to raise awareness of women’s collective experiences and lived realities, and to help move the conversation for a more gender-balanced world that honors and is inclusive of #Two-Spirit women. International Women’s Day is celebrated everywhere. It’s a big day for inspiration and change.

Violence against Indigenous people is significantly higher than that of other ethnic and racial groups in the U.S. yet our communities aren’t properly studied and hard data on the levels of victimization aren’t often available. This is especially true for Indigenous Lesbian, Gay, Bisexual, Transgender, Queer, Questioning, Intersex and/or Two-Spirit (LGBTQIA2S) people. We often fall prey to both heterosexual and cis non-Native and Native perpetrators of violence, but this abuse more often than not goes unacknowledged.

Last month, I published an article with Truthout regarding the first ever report on urban Missing and Murdered Indigenous Woman Girls and Two-Spirit (MMIWG2). The findings weren’t surprising to me, but what repeatedly stood out in my research is how the issue of violence against our LGBTQIA2S relatives seems of no importance to many of our straight and cis relatives. During the National Congress of American Indian’s (NCAI) Executive Council Winter Session, I asked leadership several times what NCAI is doing to combat the violence against Two-Spirit people and every time my question went unanswered. I’ve watched as we are repeatedly discriminated against and violated by our own people. Even the non-Native queer community rarely, if ever, has our backs leaving many feeling alone and with higher rates of suicide attempts, mental and physical illnesses, and the abuse of drugs and alcohol.

In the first ever study looking at the rates of violence and the outcomes against lesbians, bisexual, and Two-Spirit American Indian and Alaska Native women found that 85% have experienced sexual assault and 78% were survivors of physical assault. Of these survivors 70% reported being sexually assaulted by someone they knew, 63% by a stranger, and 53% by both. Thirty-eight percent of these relatives have experienced both sexual and physical assault by strangers and people they knew. Abuse often began in childhood with 76% reporting they were 18 or younger and assaulted by someone 5 years or older.

The authors cited other alarming statistics finding that one-third of Two-Spirit men in Canada have been “gay bashed.” In the U.S., 45% of gay, bisexual, and Two-Spirit men reported sexual or physical assault by someone other than a partner versus only 2% of straight and cis Native men.

In a study by the National Gay & Lesbian Task Force in 2011, 46% of Two-Spirit people reported being rejected by family and 45% suffered family violence. Homelessness is a common issue for Native transgender people, as well as experiencing discrimination in shelters. Fifty-five percent reported being harassed by shelter staff, 29% were turned away, and 22% were sexually assaulted by residents or staff.

For many of us in the community we don’t need to read these statistics because we’re living and know these realities. Marcy Angeles (Guamares Indian and Chiricahua and Mimbreno Apache) is a transwoman and Two-Spirit musician, writer, and painter who shared her stories of anti-queer abuse with me. While in high school she was assaulted by her schoolmates as they held her down and performed an exorcism on her for 30 minutes. She was also regularly spat on and had to stop eating in the cafeteria because students threw apples and oranges at her. Eventually the violence became so severe she quit school. On her last day of school 7 students threw stones the size of her first at her in front of a teacher. It wasn’t until she began to throw stones in self-defense that the teacher ended the attack. “I learned very quickly the consequence of being a Two-Spirit in an area that is so religious with a subconscious colonial mindset” she shared.

Osage nation member and trauma-focused psychotherapist, Marca Cassity, RN, LMFT, shared similar stories with me. “As a gender non-conforming, transmasculine, Two-Spirit, assigned female at birth (AFAB) person, I personally live with the tension of potential violence on a daily basis,” Cassity said. Similar to many Two-Spirit, Marca has been assaulted and demeaned by both white and Native heterosexuals and cispeople. While at the Red Earth Pow Wow in Oklahoma City, a Native elder berated Marca and their partner for having their niece with them and then handed Cassity a Christian pamphlet that said “Adam and Eve, not Adam and Steve.” Marca’s non-biological child was even taken from them because of their identity. Eventually Marca had to leave Oklahoma for their own safety.

As Marca’s experiences demonstrates, being out as Two-Spirit can often result in the loss of our connections to our lands, ceremonial space, and people. As a result, the threat of being outed is a valid fear for many Two-Spirit. A Two-Spirit relative who wishes to remain anonymous reported that his local community has had been concerned about online attacks from the far right by being “doxxed or otherwise exposed.” According to Wikipedia, “doxxing (from dox, abbreviation of documents) or doxing is the Internet-based practice of researching and broadcasting private or identifiable information (especially personally identifiable information) about an individual or organization. … It is closely related to Internet vigilantism and hacktivism.”

Luhui Whitebear (Coastal Band Chumash), Assistant Director of the Native American Longhouse Eena Haws at Oregon State University, explained to me that she doesn’t use the term Two-Spirit because she doesn’t know the roles and responsibilities that came with this identity because the Spanish missionaries tried to erase that part of her culture. “I think erasure is it’s own type of violence and one that Indigenous queer and Two-Spirit people face on a regular basis. The constant push back about identities is exhausting and hurtful in a spirit sense” Whitebear said.

Our LGBTIA(2S)[i – see below note] relatives from the south are also suffering greatly under multiple forms of oppression. Last month ICE reported that there are at least 111 “self-identified transgender individuals” in their custody. With many Indigenous people, including those that are LGBTQIA(2S), are fleeing the violence in their homelands across Central America they are often met with more violence once in the U.S.

Education and increased policy protections were repeatedly mentioned to me as solutions to the violence Two-Spirit people and communities endure. “I think it is up to folks who maintain a close relationship with home communities and traditional elders to bring back our societies” my anonymous relative shared. Angeles said that Indigenous people need to relearn “who we were before facing the harshness of colonization” and that the stories of the brutal treatment we’ve suffered must be told.

In my research, I have found that the information on violence against Native LGBTQIA2S people is often wildly inaccurate to the point that it’s obvious that many don’t even understand our identities and experiences. In NCAI’s A Spotlight on Two-Spirit (Native LGBT) Communities Two-Spirit was used interchangeably with words such as gay leaving the impression that they don’t understand the difference between gender identity and sexual orientation. They even listed the Human Rights Campaign (HRC) as a “strong ally and advocate for LGBT and Two-Spirit Natives” which couldn’t be further from the truth. HRC has repeatedly been admonished for their biphobia and transphobia, as well as racism and sexism in their hiring and leadership practices. In my 17 years of being out and active in the LGBTQIA2S community, I have not once seen, read, or participated in any HRC communications or events where Indigenous people were recognized, I have often felt erased as a bisexual.

In order to combat this violence Indigenous people and nations must also ensure that data on our missing and murdered LGBTQIA2S relatives is accurately captured. In the Urban Indian Health Institute’s report on urban MMIWG2, they found that many law enforcement databases automatically default to white if police don’t enter the person’s race. Kerry Hawk Lessard (Shawnee), Executive Director of Native American Lifelines, told me that “I have seen community members listed as several different races, which tells me law enforcement is not asking (for racial classification) and just eyeballing it.” It stands to reason that if police aren’t accurately entering us as Native then they most likely aren’t accurately counting our gender identities, effectively erasing the genocide committed against our Two-Spirit and trans relatives. Despite this none of the existing policy to properly count and protect Indigenous missing and murdered relatives includes the data collection and protection of Two-Spirit people and communities.

We have much work to do in both Indian Country and the non-Native world if we are to ever recognize not merely the existence of Indigenous LGBTQIA2S people, but to also protect and honor us. Leaving anyone behind and erasing their genocide is a gross injustice and speaks to how we are being failed by our heterosexual and cis relatives and non-Native straight and LGBTQIA people. While terminology has changed, queer and Two-Spirit Native people have always existed, and we will continue to exist. We bring balance to our communities and nations and our inclusion is necessary if we are to ever fully decolonize, return to our ancestral ways, complete our circle, and find justice for all LGBTQIA people.

[i] Editorial note for the inclusion of 2S used in this section: The term Two-Spirit is used primarily in North America. Some Indigenous people, but not all, of Central and South America have embraced and use the term Two-Spirit. This may be an example of the utilization and operationalization of Two-Spirit by this individual. However, Two-Spirit does not have universal application to this geographic area.

Jen Deerinwater is a classically trained vocalist vagabond with a love for books and antique maps. She has several degrees from overpriced universities and the student loan debt to prove it. Jen is Bisexual, Two-Spirit, Disabled, and is mixed race Tsalagi-a citizen of the Cherokee Nation of Oklahoma. After several years spent in the trenches of ameriKKKan politics you can now find her stirring the pot of radical discourse through journalism and grassroots organizing. Jen is also the founder and executive director of Crushing Colonialism, an international, Indigenous, multi-media organization. You can follow her soapbox rants on Twitter, Facebook, and Instagram.